Is your stance putting you at risk?

Over 30% of NHL goalies are missing games and practice time due to low body soft tissue injuries. With those at the highest level having greater access to resources, one would expect to see a decrease in injury rates – but we haven’t. Taking a look at the data at the Sports Forecaster, sportsforecaster.com, and Man-Games Lost, mangameslost.com, we can see that over the past over the past 5 years they have stayed unreasonably high:

With the current season half-completed and the injury rate already tracking at over 30%, 2018-2019 isn’t looking any better.

While we don’t have full access to what every NHL goalie is doing with respect to coaching, training and recovery, we can garner some insights by looking at their stances. Much like how every athletes’ running and jumping mechanics can show their limiting factors – in my experience, a goalie’s stance can be viewed much the same.

To do this, we’ll compare the stances of professional goalies who have avoided injury to those who are missing large chunks of both game and practice time due to injury. To ensure a large enough sample size, we have considered all NHL goalies that have played over 20 games a year in the past four years, including the current season.

From here, we can make a few inferences as to why some goalies are able to continually handle high workloads and others end up spending more time on the therapy table than in the net. This starts with a side-by-side comparison of goalies’ stances – one with low injury history against another with a high injury history. 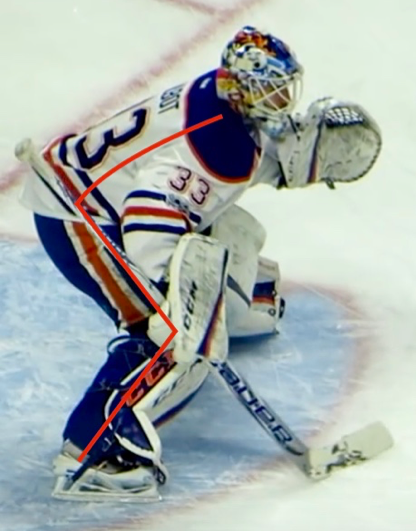 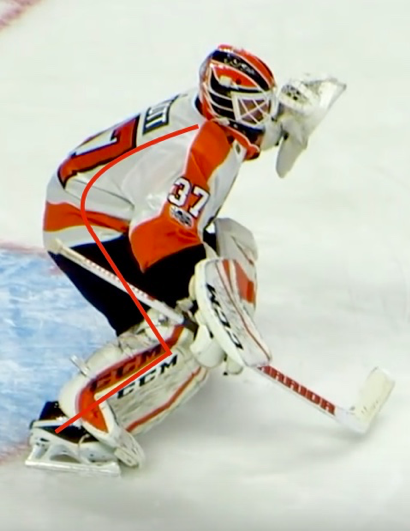 In our first example, we have Cam Talbot (on the left) and Brian Elliott (on the right). Over the past four seasons, Talbot has missed zero games due to low-body soft tissue injuries, while Elliot has missed over 50 games with soft-tissue low-body ailments.

In comparing the stances of these two goalies, marked by lines to better show knee and hip angles as well as torso posture, we notice two primary differences, excluding the position of the hands. The first difference to note is the angle of the knees in relation to the femur – Elliott sits noticeably deeper through his knees than his hips. This extra flexion in his knees would indicate a larger load through the knees and lesser load through the hips – and ultimately, additional stress placed on the knee joints (Nagura, 2002).

The second difference between these goalies’ stances is the rounding of the low back, or “tucking” of the pelvis. Here we can see that Talbot has a fairly neutral (flat) back, whereas Elliott rounds more at the bottom of his torso as it approaches his hips. As this allows the knees to shift forward as the pelvis also shifts forward, this will also impact the loading of and stress upon Elliott’s knees as mentioned above (Zazulak BT, 2007) 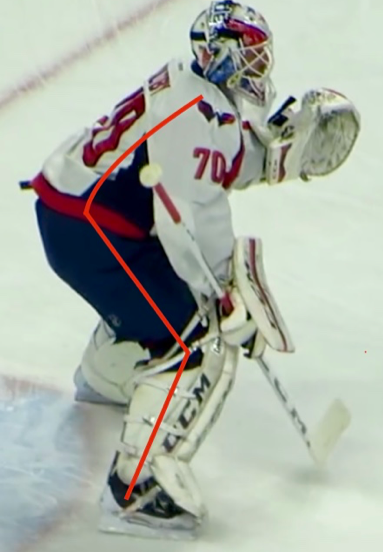 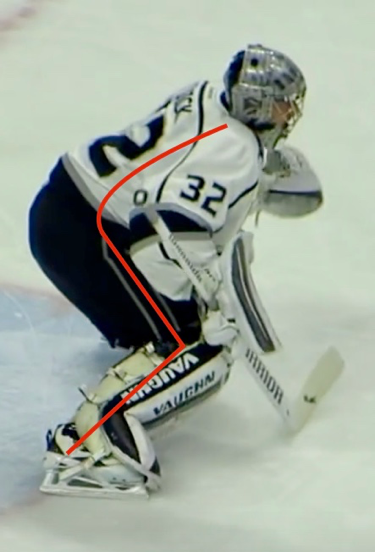 In a second example with Braden Holtby (pictured on the left) and Jonathan Quick (on the right), we will see similar findings. Over the past four seasons, Holtby has missed two games due to low-body soft tissue injuries, while Quick has missed over 70 games with soft-tissue low-body ailments, primarily his groin.

In this example, Quick’s stance has his knees forward with a fairly wide crouch, maintaining decent posture with his torso and little rounding at the hip – much like Elliot in our first example. This is in contrast to Holtby, however, whose stance is with a noticeably more upright posture, narrower width and significantly reduced knee flexion.

While these example sets are only two of many, these comparisons can be used to help young and aspiring goalies comprehend not only the concept of good stance mechanics, but also the importance of injury prevention. The next step with this approach would be comparing knee flexion ratios in relation to hip flexion ratios of the two groups and seeing if there’s an ideal range to help mitigate injury risk.

In my experience as a strength and conditioning coach, I have seen an alarming trend of more goalies come in with knee and groin problems than those who are healthy. Goaltending is one of the most mentally and physically demanding positions in all of sport. Through greater awareness of how we’re moving on the ice, we can work toward the ultimate goal – a decreased risk of injury and increased opportunity for improvement. For more information about Tavish and Citius Performance in Calgary go to https://www.citiusperformance.ca/ and follow them on social media at @citius_strength.

The Next Step In Physical Performance

My Thoughts on the Bantam Draft

SPRING AHEAD OR FALL BACK?